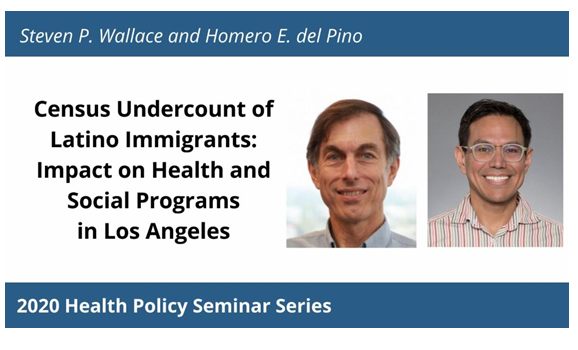 Register for the webinar

Every person counts, but will every person be counted by the U.S. Census this year? On April 1, the U.S. Census Bureau will conduct its decennial head count of the U.S. population. There is a concern that immigrant groups, particularly Latinos, may be fearful and less willing to participate due to the current administration’s anti-immigrant rhetoric and policies, including the proposed addition of a citizenship question, which was blocked by the Supreme Court. Community organizations, advocates, and other groups have been conducting outreach to immigrant populations to eliminate concerns and ensure an accurate count.

Data from the 2020 census will be used to determine public funding to various national, state, and local-level programs — therefore, an undercount may have a harmful impact on health and other social service programs in California and beyond.
Join Steven P. Wallace, Associate Center Director at the UCLA Center for Health Policy Research, and Homero E. del Pino, Associate Professor at the Charles R. Drew University of Medicine and Science, for a timely discussion on findings of a recent study. They conducted research on funding at risk in Los Angeles County (LAC) for health care and social services, along with an analysis of services that could be lost if Latinos are undercounted in the census. This study was supported by CTSI's Integrating Special Populations Program.
Speakers will discuss the projected funding loss for critical services in LA County, such as the Supplemental Nutrition Assistance Program (SNAP), Housing Choice Voucher Program (Section 8), Head Start early childhood education program, and the Health Center Program, if there is a 2%, 5%, or 10% undercount of Latinos. The study found that a worst-case scenario (10% undercount) would result in missing about 466,000 people in the census count and losing $221 million in federal funding. The authors will discuss the overall implications of a census undercount on critical programs and services for the county's underserved and underrepresented groups.
Where: As a safety precaution due to the COVID-19 pandemic, this seminar will be held exclusively online.

Register for the online event

This event is part of the 2020 Health Policy Seminar Series. Supported by the UCLA Center for Health Policy Research, California Health Interview Survey and  AskCHIS.