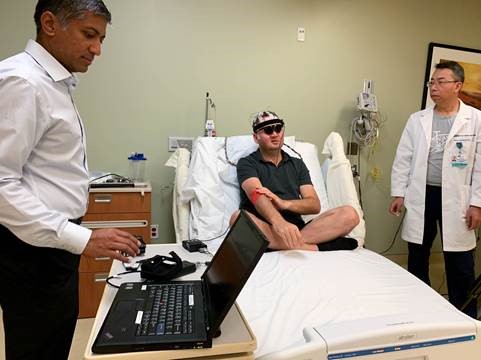 Jason Esterhuizen, who is blind, describes what he sees to UCLA Health researchers. He is the world's second recipient of an experimental device that directly signals the brain, restoring his ability to perceive light and motion. Patient rooms and nursing support were provided by the UCLA Clinical and Translational Research Center.

Seven years ago, Jason Esterhuizen was in a horrific car crash that destroyed his eyes, plunging him into total darkness. Today, heâs regained visual perception and more independence, thanks to an experimental device implanted in his brain by researchers at UCLA Health.
âNow I can do things that I couldnât do before,â said Esterhuizen, 30, who moved from his native South Africa to participate in the clinical trial at UCLA. âI can sort the laundry, find my way in lighted hallways without using a cane and cross the street more safely. Itâs making my life much easier.â
The device is geared to people who used to be able to see but lost their vision to injury or disease. While it doesnât provide normal sight, it enhances usersâ ability to navigate the world by restoring their capacity to detect movement and distinguish light and dark.
Read the full UCLA press release.